I’ve been raiding Antonia’s photo albums on facebook again and found this! 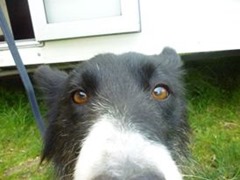 She is watching you.

I will say now, as most of you will already have realised, this is not a photo of Antonia. This is my dog Meghan and a slightly strange camera angle from Toni’s experiments during one of few walks we’ve been on during our friendship. When you live on a farm you tend to find that walking is one of the few options you have for a pastime. Though the space provided in a large garden and open fields do mean you can have a pretty kick-ass party now and again.

As I mentioned, I was trailing through Miss Brennan and my Miss Joanna Forrester’s photo collections in the hope of finding something that shows “where I live” for today’s Daily Prompt. What I realised was that the place I grew up in is quite different now than 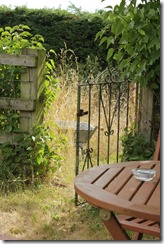 the place my parent’s brought newborn baby me home to all those years ago. This hedge for example:, the one behind the gate on the other side of what was supposed the be a vegetable patch once upon a time. I remember my mother pulling the trees for that hedge out of the back of a Land Rover and planting them along the paddock. The hedge doesn’t extend the full length of the paddock, there was supposed to be a gate at the end but it has spent the last, oh I don’t know… ten years? leaning against a fence which is possibly more likely to fall down than the unattached gate. 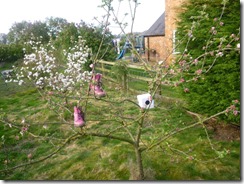 The little gate that you can see replaced a stile, and for a couple of years we had a vegetable garden and a sort of orchard. The four apple trees survived but the pear trees sadly did not. You have to watch out for the stumps if you’re brave enough to go and mow the lawn in there. (Those are the shoes which earned Antonia the title of Pink Boots, the only name for her that my Grandfather ever remembers. Don’t ask why they are in an apple tree, neither she or my sister would explain what they were up to that day.)

What was left of the paddock became The overgrown garden. This was where my sister and I went on archaeological digs, which turned into the attempted construction of an underground lair. (i.e a very large hole in the ground.) We had the trampoline which turned all our socks filthy, got singed during a bonfire one November and then finally taken apart so that it could be stored away during a party in case any drunk people decided to go bouncing. Three years on and none of us have bother to put it back together again. Maybe this summer though. (Probably not.)

For a less than outdoorsy person, I had quite an outdoorsy childhood. If the weather was warm enough my sister and I would go paddling in the brook just down the drive. All you had to do was avoid the peat bogs that dotted the stream and avoid taking

the dog anywhere near it because she hates water and is quite happy to tip you into it if she thinks you’re trying to make her go in. Of course at this time of year the brook would be freezing… though I do think one of my friends did go paddling in January one year just to prove she could… As I’ve mentioned before on this blog, I hang out with unusual individuals.

Everything changes though. Now the vegetable garden looks more like the overgrown garden, we never took out branches from out apple trees so the branches always attack you and the mover if you get too close and the rabbits invaded. The overgrown garden has that many warrens that we deem it best to stay out of there than risk total cave in these days. Twemlows is still my home but since I learnt how to drive and started uni I spent less and less time in the gardens or walking the farm. (Not that I walked the farm that much to begin with.)

Maybe this summer, instead of a garden party I’ll organise a small poetry BBQ of something of the sort? It’s been nice looking back at old photographs.