Have you ever had to weave your way through a BBC filming set to get to one of your University classes? It’s weird, and thoroughly distracting. What’s more, I’ve spent the last week trying to pronounce Poldark and failing. For some reason, that name simply does not work when coming out of my mouth! For those of you left thoroughly confused let me explain; the BBC has taken over Corsham at at some point last week Aidan Turner was there, on the high street and I missed him! Of course Corsham isn’t the only place that they have been filming Poldark, but I will have to see if I can spot in when the series comes out.

Originally a series of novels by Winston Graham, Poldark was filmed as a BBC television series between 1975 and 1977. The new remake is set to come out in 2015 with Aidan Turner replacing Robin Ellis as Captain Poldark. I’ll admit I’ve never read the novels or watched any of the adaptations. I was utterly clueless about who the heck Poldark was until someone explained it to me and told me to ask my mother because she would know. My mother then told me to ask my grandparents because she was too young when it came out. I’ll admit that made me feel somewhat better about not know what was going on. 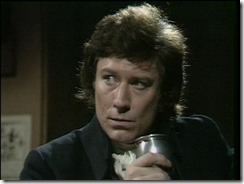 From what I have gathered, and I’ll admit I’ve not read the books or watched the original show! Poldark returns to Cornwall from the American War of Independence to find his fiancée now pledged to his cousin, his family’s fortune on the brink or ruin and his father dead. Somehow I don’t think there will be any lack of drama in this series, do you?

But back to Corsham, which looked amazing. It’s a shame I didn’t get anymore photos, but I felt rather awkward standing there trying to grab snapshots as everyone rushed around for the next scene. The town itself has managed to hold onto most of its historic aspects, yet it was still very strange wandering down to Corsham Court when most of the people around you are in period dress. The only other experience I could really compare it to is driving through Bath when the Jane Austen Grande Regency Promenade was taking place. My boyfriend, who didn’t know about Jane Austen’s link to  Bath, found this incredibly confusing. [Imagine lots and lots of people, mostly women, dressed in Regency clothing and wandering down the street past your car. I was in no way jealous of their dresses. In no way whatsoever! … Okay, maybe I was a little bit. 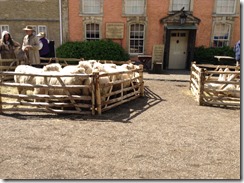 So it looks like I’ll have some catching up to do over Summer. The original Poldark series was only twenty-nine episodes and it looks like something both the boyfriend and I would enjoy. Of perhaps I will wait until next year and simply watch the new version. I might do both! Turner against Ellis, the battle between captains to see who has the greater swoon factor. I might even get around to adding the novels to my ‘must read at some point’ list. Lord knows it isn’t long enough already.