Roach had never given up on praying, even in the trenches he’d managed to find some hope in reciting the Lord’s Prayer whenever the whistle blew out somewhere along the line even if it wasn’t his turn to go over the top.
Back at home things were different.
He watched the vicar mouth silent words, the sound slipping past as if he was watching the service through a thick sheet of glass and when the congregation knelt his knees seized, leaving him hunched over the pew in front his hands clawed around the carved wood. His wife wrapped her hand around his wrist to pull him down, her voice hissing in his ear that there were people looking, watching, what did he think he was doing?
He didn’t tell her that here in the church their words were mute and wrong, that they did not lend him strength or courage, what would have been the point in telling her any of that when this was all she’d ever known… 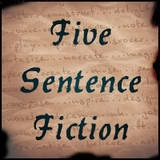 I’m going to point out that I myself have a weird relationship with religion. I find it fascinating but abstract which means that I tend to stick with calling myself Agnostic since that is probably the closest I’m going to get to a definition of what I am. However, I am aware of how profound faith can be to some people, and how much of an impact it can have on their lives. My one Grandmother has found Christianity and God to be hugely supportive in some of the most trying times of her life and I know others feel very similarly. We all need a belief to fall back on, what that belief is though is as individual as the person who holds it.