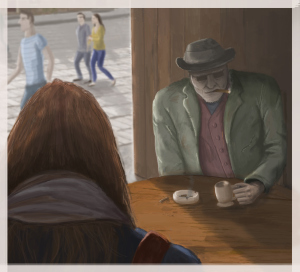 “I was a watcher,” he told her, grinding his cigarette into the bottom of the ash tray and using his free hand to push his sunglasses further up the bridge of his nose. “Always bloody watching,” he spat. She wanted to ask what he’d been watching but somehow she felt her voice was not welcome at this conversation, at least not at this time, not right then. “I watched them all,” he said and waved a hand at the crowds milling past. It was a weekend, hot and clear so the crowds had come flocking, spilling into the cobbled streets of her little town to raid the shops and tea rooms. She curled her fingers more tightly around her watery cup of tea. “All of them!” he yelped, voice pitching. “I saw it all, each plot, each scheme, each grab for power. Tell me,” he said leaning in. “Tell me what you see in a crown?” She shrugged. “Metal?” she guessed. “Well of course, of course, but what else?” “Gems? Diamonds?” “Deeper!” “Power?” “Blood!” A tourist dressed in dungarees shot them a look and picked up his pace. “Blood?” she said hesitantly. “Why blood?” “All crowns are steeped in blood,” he said. “You won’t find a monarch in existence who hasn’t done something that leaves some sort of stain.” “Isn’t that a little cynical?” she asked. He shook his head. “I was a watcher remember, I saw the plays of power and it wasn’t just the old ones, Nefertiti, Cleopatra, Julia Cesar , it wasn’t just their sort. Power is a blood sport and that’s the fact of the matter.” She nodded slowly, lowering her hand closer to her handbag for a quick escape. “You don’t say.” “Oh but I do,” he was animated now, bouncing in his seat. “It can make you lose sight of the other things after a while. All you see is the blood.” “Sounds traumatic.” “Indeed! I grew to hate being a watcher, grew to absolutely hate it!” “And now?” She watched him pause, her hand wrapped around the straps of her handbag. “Well I’m not a watcher anymore,” he said. “You can’t hate being something you’re not.” “You can just quit?” she asked, handbag in her lap. “Of course,” he said. “You just get rid of your equipment and hey presto. No more watching.” “Equipment?” she repeated. “What equipment. Cameras and stuff?” “No, not a camera,” he said reaching for his glasses and pulling them from his face. “It’s a bit more inbuilt than that.”