Woo! Today I struck 15,000 hits on Writing and Works! It seems that the stats keep going up and up lately and it makes me so happy to see people reading and enjoying my work. So here is a blast from the past, posted when I only had fifty followers and was just starting to get to grips with WordPress in April 2012. Artwork by the wonderful DeviantArt artist The Forsaken Sailor 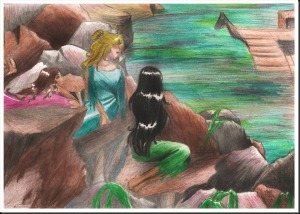 James McCormic wouldn’t realise it until it was too late, but he never stood a chance when it came to the beautiful girl sitting in the window of the coffee shop on St George’s Street.

He had to walk past the shop most mornings, his eyes flickering towards the flawless glass each time, just to check if she was there. Always waiting with her coffee cup in one hand and a blank covered book perched carefully upon her knee.

She never saw him. At least James knew that she had never looked at him. Her gaze would remain downcast and he would walk on by pretending that he hadn’t spent half an hour preening in the mirror to perfect his hair, just in case she turned and saw him.

Each day his pace slowed further, stuttering slightly as the battered chalkboard menu crept into view. He thought it was his own courage telling him to push open the door of the café, and shuffle towards the counter where the waitress smiled helpfully. She filled the order he had managed to choke out before the proximity of the beautiful girl in the window had forced James McCormic mute.

The dull thump of pages pressing closed, almost stopped his heart, the strained organ faltering as the click of a coffee cup hitting wood just managed to beat the hissing machines behind the counter.

A sudden fear began to consume him, similar to someone throwing a bucket of icy water over a person’s head. When the waitress handed over his order he clutched at it with shaking hands, horribly aware that her smiled had morphed into something more sinister and cold.

“The sirens used to lure Greek Sailors onto the rocks.” The beautiful girl said softly, shifting against the threadbare fabric of her seat. “Our voices could force them to ground their greatest possession just so they could pull themselves a little closer.”

James stood shaking, his coffee stone cold beneath his fingers and islands of mould floating around on the scummy surface. The glamour began to peel itself away, leaving behind only the peeling wallpaper and broken furniture that had been left there years ago.

“It took us a while to realise that we didn’t even need our voices to get out feed.” She said, her back now to the window and her manicured nails tapping out the rhythm of James’ frightened heartbeat on her thigh. “We could simply sit and wait for someone to come stumbling into our arms.”

James McCormic had never stood a chance with the beautiful girl who sat in the window of the abandoned coffee shop on St George’s Street.

His parents called for his safe return, the police scoured the routes he used, the local haunts and hang outs. No one looked at the dust coated window of the abandoned coffee shop of St George’s Street.

A young couple bought the building two months later. Only to sell it again as soon as possible, their dreams thoroughly shattered by the secret under the floorboards.

“I’m telling you!” The coroner exclaimed exasperatedly, waving his arms in frustration as the police shook their heads in disbelief. “This boy literally died of fright!”

James McCormic disagreed. He was sure that he hadn’t died of fright. Such a thing would be impossible, since he was, unfortunately, very much alive.

The smell of stale coffee refused to leave the air of the cramped little room, and the only light came from a bare bulb swaying from half chewed wires. The beautiful girl from the coffee shop window hummed under her breath as she walked down the rows of shelves, her nails clicking against the glass as they caressed each individual bottle.

“Now, now boys.” She soothed, listening as her presence brought a chorus of pleas and threats. “No more noise.”