Have you guys ever heard of Free Comic Book Day before? I haven’t. Recently it seems that quite a few national/international days have been popping up and I knew nothing about them at all.

Of course it’s great for bloggers since we always have sometime to ramble about, but back to the topic at hand. 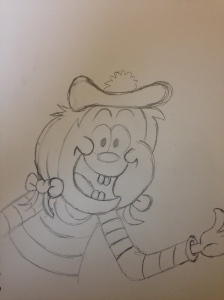 According to the Twittersphere, today is Free Comic Book Day and it seems a heck of a lot of people are tweeting about it. I’ll admit that I’ve never been much of a comic book reader, aside from the Beano when I was a child, because hey! Who doesn’t love Beano? I used to keep my collection in an box I’d decorated with sticky back vinyl that had the world map printed on it. Minnie the Minx was my favourite character with Dennis the Menace a close second. I think the fact that Minnie had short hair like mine and liked scrambling around with the boys appealed to me. I spent most of my primary school days playing with lads instead of girls and I found my friendships with them were much stronger than the ones I formed with the other girls in my year.

Now days, my favourite comic book character has to be Deadpool. I didn’t know much about him until I started dating my fiancée who introduced me to the comics. During my second and third year at university, he leant me his collection of Deadpool comics and I found myself falling in love with this insane, funny, slightly tragic character. What made things even better was getting to watch the Deadpool movie and see Ryan Reynolds portray that character from the comics to perfection.

The picture of Deadpool took me about an hour and a bit to get to the point you can see in the pictures, the sketch of Minnie took about ten minutes. For a man with very few facial features this was not an easy draw. I kept getting the eyes in the wrong place and the black patches on the mask make it difficult to judge how long and wide the image should be on the page. I’m fairly happy with both of them though and I’m glad I’ve had chance to do some drawing again.

Let me know in the comments what your favourite comic book was as a child? Did you read the Beano too or perhaps you read it’s great nemesis, The Dandy! Whatever it was, come and share it.