The 1920s Royals Royce Ghost exploded impressively. One moment it was whole and beautiful, the next- boom! Lying on the grass face up, Henry could still hear the echo in his ears, the shock-waves in his bones. He groaned and rolled, ignoring the sharp bits of metalwork burning and biting into his skin as he crawled onto his knees and tried to lift his head high enough to see what was left of the house.

The front of it was a mess. The windows were bare, the glass shattered, the walls pockmarked with debris and the doors to the mansion blown inwards off their hinges. His arms trembled beneath his weight and gave out. He coughed and felt something move in his chest and then pain, all consuming pain, and suddenly he was coughing red onto the grass.

He saw the shadow fall across him and there was a hand beneath his chin, another on his shoulder and he was looking up at a face he thought he’d escaped.

‘Hello Henry.’ Philip crouched on his heels. He moved his hands so that they rested either side of Henry’s face and his features creased into something that almost resembled concern. He looked just as he had done in New York six months earlier when they had met, suit untouched by the chaos, eyes the same mahogany, auburn hair and a sculpture’s jawline. You could not help but fall in love with Philip Hardgraves, it was an inevitable outcome upon meeting him, and he knew this. He used his looks to get everything he wanted and used his cruelty to crush everything he left behind.

‘You’re here,’ Henry gasped, blood mixed with saliva as it down his chin. Philip swiped his thumb along Henry’s jaw and wiped it away, the touch tender.

‘Yes,’ he said. ‘I’m here. You knew I would have to be.’ He eased Henry over onto his back and let the young man’s head rest against his thigh. ‘You knew I would come for you.’

Henry’s vision was greying out and the weight in his chest made it difficult to draw breath.

‘Don’t fight it,’ said Philip. He threaded his fingers in Henry’s hair. ‘Fighting it always make it so much worse, I learnt that the first few times I died.’

‘What- what-‘ Henry’s words dissolved into coughing as his ribcage seemed to collapse in on itself. He wheezed in breaths but his limbs had turned to lead and lungs were refusing to co-operated.

He should have been safe at the manor, the village should have afforded him some sort of protection against Philip and his kind, Evangeline had promised him that. He could see her still, mouth and throat open, red spilling across the marble entrance hall of her parents’ home. There had still been flowers in her hair from the party the previous evening, the party where she had laughed and chattered like anyone else. The party where she had told him she was a witch and he was in terrible, terrible danger.

‘You’re a murderer.’ Henry’s voice was thready but he managed the accusation. ‘You killed her.’

Philip nodded. ‘Yes, I killed her. I’ve killed her before and I’ll kill her again no doubt, that is the way of it.’ He pressed his lips to Henry’s temple, they were dry. ‘You will learn it all in time, you will have all of time to learn.’

The pain was gone and Henry could feel himself slipping away.

‘Why?’ Philip chuckled. ‘You think I chose this? You think I wanted to share? No. This is just as much of a shock to me as it will be to you but I believe in making the best out of a bad situation.’ Henry’s chest had stilled and the young man lay limp in Philip’s arms. ‘I’ve been alone for a very long time Henry. Our kind have so few we can speak to, I’m not even sure there is an ‘our kind’ so to speak, we are freaks, abnormalities, a mistake in the great scheme of things.’ Philip lowered Henry’s head onto the grass and brushed the dirt from his clothes as he stood. He turned back to the house and watched as the remains of the car continued to burn. It seemed a shame but it would serve a purpose.

‘Why did this all start though?’ He looked down at the corpse. ‘It started because I was in love with a girl who loved me back. It started because she would not let me go when death came hammering at the door. It started because a witch messed around with life and death and made a score so deep in the reality of things that everything dark, vulgar and wicked had a doorway in.’

He bent down and fumbled until he found Henry’s wrists. He gripped them and pulled them above Henry’s head.

‘You can blame this all on my wife,’ Philip sighed. ‘She’s the one who decided to make you too.’ 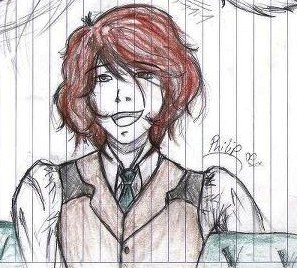