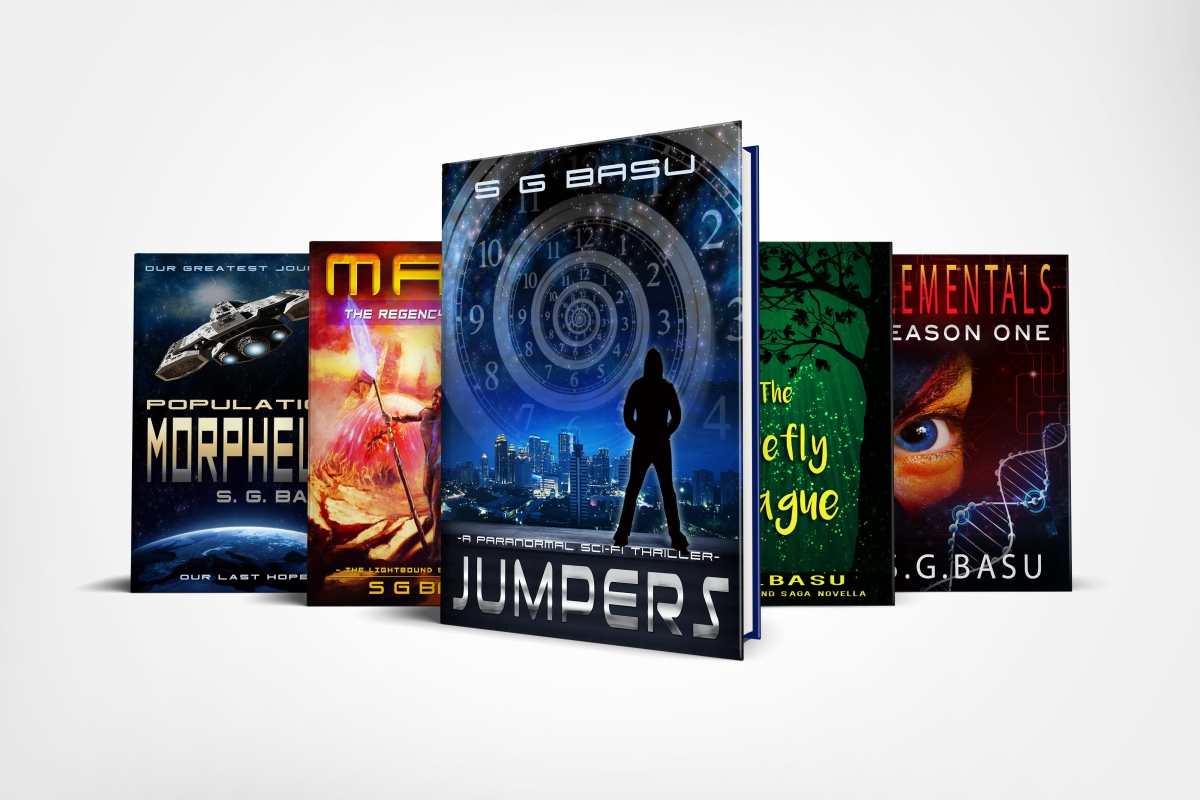 S.G. Basu is an aspiring potentate of a galaxy or two. She plots and plans with wondrous machines, cybernetic robots, time travelers and telekinetic adventurers, some of whom escape into the pages of her books.Once upon a previous life on planet Earth, S.G. Basu trained to be an engineer, and her interest in science and her love of engineering shows up time and again in her books.Besides writing, S.G. loves extra-hot lattes, fast cars and sniping on auctions. Staying up late, sleeping in, and binge watching sci-fi movies also make her happy.She shares her home with a large collection of Legos, a patient husband, and resident inspiration and entertainer, her daughter.

Okay, I admit it! I’m a shy person. But I’m probably not the only writer who’s said that. Most writers are solitary creatures and it makes sense that we are built this way. If I were the love-to-socialize kind instead, where would I find the time to indulge those characters in my head?

Anyway, given my introverted nature it follows that one of the biggest issues I have to deal with is opening up to people. Not being a social butterfly, I take time to warm up to strangers.

Unfortunately though, the job of a writer involves opening up to people more than many other professions. There might be exceptions, and some writers do keep their manuscripts locked away and to themselves, but for the majority of us, publishing is the goal. I mean, we mostly write so that other people would read our written words, right? And what are our words really? They are our innermost thoughts, the essence of our being, pieces of our soul.

Until I was at the threshold of publishing my first book, I didn’t realize how difficult it would be to let my words out for the entire world to see. I didn’t expect the obvious clash between the nature of the writing profession and my personality. When I hit publish on my first work I realized the brutal truth about the situation I was in—sharing my creation was like baring my soul, and that also to perfect strangers. And then, when those perfect strangers stopped by to tell me they didn’t like what they saw in my soul? Well, you can imagine the hurt.

I still remember not having a good night’s sleep when I got my first 3 star review. I suddenly understood why many writers were unable to deal with bad reviews, why so many others dreaded and stayed away from publishing altogether, and why yet others were devastated by rejection letters from agents. I realized writing and publishing is indeed a difficult business to be in.

Nevertheless, I was not about to crawl into my burrow and give up. I had to deal with it. It was hard the first time, but I quickly learned that the fear and the heartbreak can be managed with some planning and preparation.

Here are some of the things I’ve learned over the years, maybe they’ll help you too.

First and foremost, prepare yourself for a long, harsh ride through the glare of spotlights. Remember, your book will be read by a gamut of people. Remember, every person out there is different. So, there opinions will likely be diverse too. Not everyone will like what I write, and even someone who loves one of my books might not like a second book written by me. What we need to remember is: One person’s liking or disliking is not the final word on a book. If you get a scathing review today, there’s no reason to panic and consider yourself a failure because you might run into you most ardent fan in the next hour. True story, that! So grow yourself some thick skin.

How do you go about acquiring that thick skin?

Implementing those practices helped me tremendously when I was starting out as a writer two years ago. I sometimes wonder if it has gotten any easier over the years. Well, in some ways it has. I’m more confident of my craft and one bad review does not get me questioning my capability as a writer.

Yet many things have remained the same. Eight publications later, releasing a new book is still hard. I’m still terrified of negative reviews. Even with thousands of subscribers on my mailing list, sending out a monthly newsletter gives me jitters. I still dread getting notified of unsubscribes; they make me feel like I’m back in high school again. But, that fear is much more manageable now than it was when I started.

You can say I’m a work in progress. But I’m definitely an improved version of the work that began two years ago. And that’s all that matters, right?