If we were having coffee, well this week I’d ask if you’d rather try a glass of non-alcoholic spiced apple cider. I’m emphasising the non-alcoholic side since I’m English and cider is normally assumed to be alcoholic here. 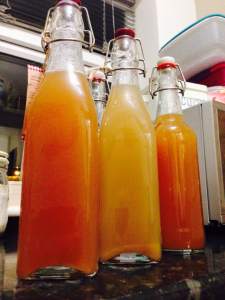 Anyway, this weekend one of the neighbours caught me on the way to buy my Christmas wreath and asked if I wanted any cooking apples. He’d been lovely enough to bring by some beans earlier in the year and he thought I might have some use for apples too.

I was going to make a crumble until the lovely fiancee suggested mulled apple cider. In the end I bastardised a few recipes, hurled some apples, an orange, nutmeg, cinnamon, cloves, and allspice into the slow cooker and left it to simmer along for eight hours.

After straining the result was what you can see in the photo. I need to reduce the amount of cloves I’m using, and amp up the cinnamon a tad, but overall it tastes pretty scrummy and super Christmassy. My kitchen is also covered in the evidence of my multiple attempts at working out how to strain boiled down apples.

Tip: Never assume that you don’t need muslin cloth and a sieve with small holes will work just as well. It doesn’t. It really doesn’t.

Aside from throwing myself into Christmas and the wonders of my slow cooker, I’m starting to kick myself into gear for 2017. I’ve now hit the half way point of the current draft for Shadow Dawn, and even though I didn’t manage to win NaNoWriMo, 50,000 words of the draft are down on papers and I’m loving what I’m writing. The rest of this month will be about finishing the current draft and getting ready to re-instate a blogging schedule come January 1st.

With the end of my AAT course in sight, there will soon be nothing in the way of me finding time to write outside of work. I will probably still find excuses, but they’ll be ever so slightly less valid.

So with that in mind I will wish you a happy holiday and goodnight. It’s a short post but I’ve not got much to say.

Let me know, are you making anything special for Christmas? What is your signature dish? Any tips on apple cider?

I’ll leave you with an extract from the current Shadow Dawn draft. Happy reading.

‘What on earth is going on?’ Tara asked. Becket had disappeared to find out what all the commotion was about and was yet to reappear.

‘Your Highness, what an unexpected pleasure.’

‘Frenrick, how… nice.’ Despite trying to maintain her calm Tara felt the heat rushing to her cheeks.

‘Did you get my flowers? I was afraid that the lack of response meant that had somehow gone astray in this huge palace of yours.’

‘No, I got them,’ Tara said. Ilia was frowning beside her and behind Frenrick one of his envoys sniggered into his gloved fist.

She was not punching anyone Tara told herself. No matter how much they may deserve it, she was not going to punch someone today. She caught the envoy’s eye and he turned the laugh into a polite cough.

Becket chose that moment to reappear, stealing Tara away before Frenrick could reveal anything about the flowers, or their note, to Ilia.