So it’s been a while since I wrote a chatty, update post. So long in fact that the original ‘If We Were Having Coffee’ seems to have fizzled into non-existence. But anyway, what have I been up to since August.

Well I’m still working on Shadow Dawn. The draft is now past the 70,000 words mark and I’ve had to go back to the start as I feel like I’ve completely lost track of what I intended to do with the book when I started writing it. On the plus side, I reread a chapter from about half way through and didn’t hate it so there might be hope for this story yet.

For the past week I’ve managed to churn out more poetry than I have done over the last three months. If you follow the site you’ve probably noticed the upturn in the activity and I’m trying to keep things that way. I’ve started posting more flash fiction based on writing prompts from Story Shack and I’m trying to put up something for most, if not all of the Daily Prompts. Part of this is to do with trying to get into a routine of sitting down and writing each evening when I get home. If it becomes habit then I have no excuse for not finishing Shadow Dawn or for leaving this blog untouched for three/four months at a time.

Speaking of poetry, NaPoWriMo and Camp NaNoWriMo are just around the corner. In 2016 I managed to complete NaPoWriMo, but last year I didn’t even manage to complete the first day. For 2018 I’m hoping to not only finish NaPoWriMo but to also hit a few other poetry goals. So far I’ve not been doing too bad. In January I entered my first Poetry Slam, I didn’t get past the first round but I had a lot of fun and got some fantastic feedback from the other poets competing. In February I entered The International Book and Pamphlet Competition hosted by The Poetry Business. This will be the first of the six competitions I’ve challenged myself to submit to this year. I don’t know if I’ll manage to get anywhere with any of them but I won’t know if I don’t try.

As I’m now re-working Shadow Dawn more than writing from scratch, I also want to get back to my Headquarters series, and more specifically the Safe Haven branch that I started writing a couple of years ago. Since I’m also studying for my Level 3 AAT accountancy qualification my target is one update a month for the series. That might become two for March as the first update will be the redraft of part one. 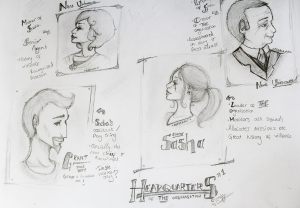 Unfortunately I’m not looking to have any Guest Posts this year. I’ve done them in the past and while they are a great way of getting to know fellow bloggers, they take a huge amount of organizing. Finding willing participants is also difficult and time consuming. I am going to try a link-up series in April for fellow NaPoWriMo participants but that will be once a week and be incorporated into a weekly update post about how the challenge is going.

However, I am looking for fellow bloggers who are willing to share their poems and thought this Thursday as part of International Women’s Day. A week or so ago I posted a piece called Legs Eleven about the pressures of people judging you based on how you dress. This Thursday I want to put up a post for anyone to comment on and link to that looks at the biggest challenge they feel they have had to face as a woman, either in life or in the last year. If this is something you’d like to get involved with then you can email me at caroljforrester@hotmail.com.

Finally, I’ve also started experimenting with audio recordings of my poems. I added one to today’s poem When The Words Fall Out and I’ve also done one for my piece Legs Eleven which is included below. Let me know what you think in the comments below. I’ve tried recording videos of poems before but never liked watching myself very much so this seemed like a nice in between. Do you think they work or is it better to leave to poems as they are and let the readers just read them.