It’s been almost a month since I wrote a WeekendCoffeeShare post so I feel like I’m probably overdue an entry. My last post was January 13th, less than two weeks into a new year, and now we’re chasing towards the middle of February with the same chaotic speed that always comes with being busy. One of my goals for 2019 was to try and get some more poems and short stories published online and continue putting myself forward for writing competitions. So far this seems to be going relatively well.

While I didn’t get anywhere in the Write Out Loud poetry competition that I entered in December, the two poetry submissions I made to The Drabble and Ink Sweat & Tears were both accepted and have now been published. ‘Until The Light Gets In’ went up in January and ‘Newborn‘ was published this morning. I’m now in the process of working on my next round of submissions for a few other sites and journals in the hopes that I can keep this momentum going.

Aside for these submissions I’ve continued posting poems and stories to Writing and Works. My poem ‘Man Up And Carry On‘ sparked some fantastic discussion in the comments section which I really enjoyed reading. It also had me thinking about a blog post I read about ‘What Makes A Blog Post Successful‘, is it the views, the likes, or the comments. How do we judge ‘success’ in blogging. For me I would say my most successful posts are the ones like ‘Man Up And Carry On’ as they generate interaction not only between myself and readers, but between the readers themselves. As a writer, one of your goals is to make the reader think about the things you’re writing about, you want them to take something away and mull it over. When you can see a comment thread continuing two, or three days later, you know that you have achieved this. 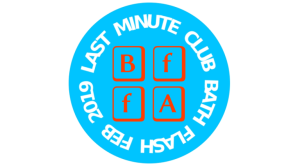 One of the submissions that I sent off today was my entry for the Bath Flash Fiction Award. Since I submitted on the last day of the window I got a lovely email telling me that I qualified for their ‘Last Minute Club’ badge. I didn’t intend to be quite so last minute about it but this week ended up being far busier and far more tiring than I expected so there was a bit of a mad dash today to finalize my redraft and to get it in. I managed it though and I can now say that I met my target of submitting an entry to a competition that I’ve been meaning to get around to since last year’s competition.

For the rest of February I’ll be doing much the same as I’ve been doing for January, just without the bout of lurgy at the end of the month hopefully. I want to add at least one more poem to my collection draft, submit to a couple more journals, start and finish chapter two for my novel re-write (I finally completed chapter one last weekend), and get on with studying for the next module in my AAT qualifications. I won’t have the results for my first two exams until March but I can keep going with the next three modules while I wait.

I will also be preforming one poem at a local arts event next Saturday and I’ve been invited to perform a five minute slot at the Shrewsbury Poetry Night in April so I seem to be getting back into the swing of live readings which I’m very happy about.

For those of you out there reading this, how has 2019 gone so far for you? Are you keeping on top of those resolutions and goals, or have you found that they’ve changed as the year got underway? More importantly, have you managed to achieve something that brings you joy? It can be small or big, what matters is that it makes you smile when you tell someone about it. Take a moment to revel in your victories. Until next time, thanks for reading and all the best for February. I hope you find a way to make this month your own.