When the bodies washed ashore, the novices were there to pluck them from the mud.

It wasn’t pleasant work. It was a short trip from the edge of the city to the bend in the river. The unfortunates who made it, came out of the silt choked waters heavy and stinking, muscles still locked up by rigour mortise.

‘Another one!’ The cry went up from lower down the bank, further along than the bodies usually travelled.

Flexing her fingers to work some of the feeling back into them, Maradine followed the other novices to the cry and tried to avoid looking as if she was dawdling. She let herself breath when she saw the child, eyes huge and bug like, withered limbs half buried in the mud. It was small, small enough for two of the novices to manhandle inside the temple doors without need of her help. She didn’t try to work out how this one had found its way to them. The monks frowned on questions regarding the vessels.

‘Jamie, Galeth, you take this one,’ said the Thalt. He was the oldest of them and as such was able to avoid the task of ferrying the dead back and forth. He stood and watched until the two younger novices had hefted the child between them, Jamie with his hands under its knees, Galeth at the shoulders. They stumbled in the mud but kept their footing. Dropping one of the vessels always resulting in a beating.

The rest of them lingered as Thalt moved on, casting a careful eye over the banks. He was short for his age, not that any of them were entirely sure of their ages. If Maradine had to guess, she would say he was close to his fifteenth year, almost a man in most circles. Thalt certainly seemed to think so. He had taken to coercing female novices into shadowed corners and empty supply rooms. Told them that it was their duty to serve all those above them in the order.

Maradine had been spared his attentions, but only because of her markings. The ones that her village had said made her a witch.

The wind picked up and Maradine clutched her robes tighter. It was still early and the bodies had been few which meant she was still dry. Soon enough the noon bells would toll in the city and the gallows would begin their daily work of filling the river. By evening she would be as wet and rank as the dead they salvaged.

She glanced up at the temple behind them, its low, squat roof crouching at the foot of the mountains. By evening the dead boy would be sat at a bench with the rest of the novices, fresh robes still stiff with starch on his fragile, little body. She wondered how long it would take him to speak. She had been silent for almost a month before Thalt had beaten words from her throat. It had been the first and the last time he laid hands on her. The only time she had believed her village might have been right about her.

She shivered again and turned her gaze away from the temple.

Once she was old enough she would be sent out on assignment. Then should might have chance to run. Until then she was bound to the will of the monks, and the flow of the river.

She watched Thalt pause at the water’s edge and counted the seconds until he moved on.

Patience was all she needed. Patience and a heart of the dead. 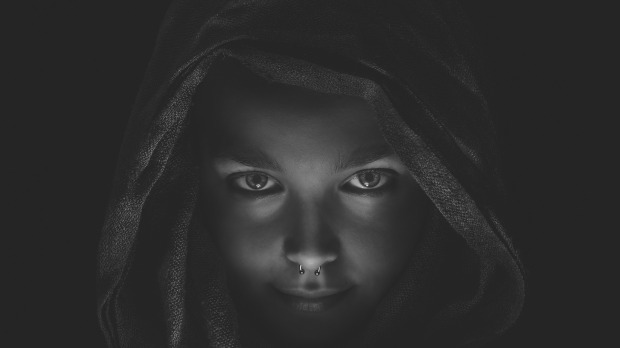 Flash Fiction written for the September Speculative Fiction Prompt. If you would like to join in then please follow the link and share your own speculative fiction pieces based on the image above. There are no word count limits, no form specifications, just a picture and your imagination.